As we enter Rose Cafe, she sits nonchalantly in casual clothes digging in her favourite chocolate gelato. She meets us warmly and is quite unassuming. Certainly a start contrast from what we know of Akanksha Redhu, India’s top fashion and lifestyle blogger. The glamorous image is a facade for this girl next door!

We begin our conversation.  Akanksha graduated from the prestigious National Institute of Fashion Technology in Delhi with a degree in fashion design. While at study, her elder sister Naina encouraged her to maintain an online diary of all her assignments and interesting projects. That’s how her blog was born in 2008. Her first job made her realise that she’s not quite cut for a 9-5 grind. Post which she launched her eponymous fashion label followed by an accessories one but soon realised that her heart lay in blogging and that’s something she should pursue full time. She took on the challenge and became one of the early fashion and lifestyle blogger in the country.

An army brat, Akanksha has spent her childhood shuttling from one city to another. That’s also the reason she’s receptive to change and is not afraid to try new things and this clearly shows in her work.
Unlike a lot of Indian women, Akanksha has been rather lucky to find support and encouragement from her family. Her husband Aman with whom she had a courtship of 2 years is actually the man behind all the beautiful pictures we see.

“Being comfortable with your body is the most important thing. If I put a picture of mine wearing a bikini, it’s to tell the girls out there that it’s okay, says Redhu who doesn’t have the regular petite frame and finds it rather difficult to fit in sample size clothes!
Her usual days are rather ordinary doing the chores of everyday life and is most likely to be found in the kitchen (eating not cooking mind you!) when not working on her blog. She enjoys doing yoga and deals with online trolls by ignoring them. Her favourite designer is Anju Modi and loves for handcrafted Indian textiles.

She really is a regular girl who has dreamt and made it big. And is a source of inspiration to all the budding fashionistas out there!

2. The craziest thing you have ever done- Bungee Jumping 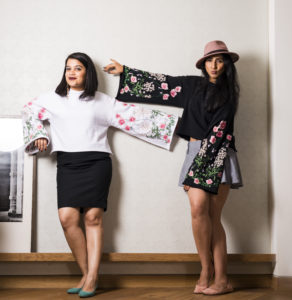